Pakistani Muslim men have been grooming the British Sikh girls for decades and the girls had to suffer horrific sexual abuse, claimed a report by the Sikh Mediation and Rehabilitation Team.

The report titled the ‘The Religiously Aggravated Sexual Exploitation of Young Sikh Women Across the UK’ was accessed by the British paper Daily Mail and it says that the British Sikh leaders say that the grooming instances go as far back as the 1960s.

This report says that just like in the case of White girls, Sikh girls were initially groomed by a group of perpetrators and would later be passed on to the other members of their family for further exploitation.

Highlighting the failure of the police, the report says:

‘The research has found verification demonstrating a history of predominantly Pakistani grooming gangs targeting young Sikh females for over 50 years.

The over-representation of such perpetrators in selecting non-Muslim victims would appear to be indicative of a wider acceptability in certain sections of the community towards the targeting of young females from outside of the Pakistani community and/or Muslim faith.”

Daily Mail cites the report on Sikh girls grooming which states that Muslims were pestering the British Sikh girls or using the Sikh girls as sex slaves and even though the Sikhs have been complaining about this yet nothing was done to stop the perpetrators. 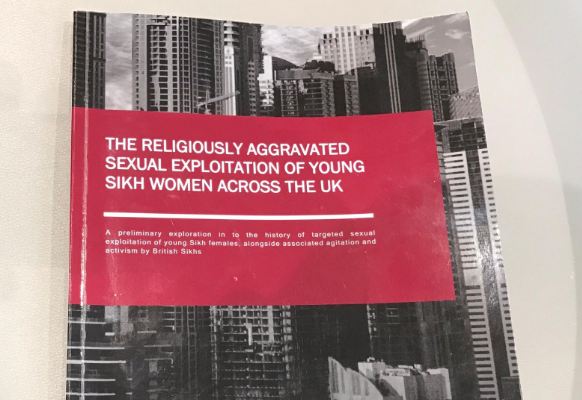 There was also a website that was run by Muslim men who boasted about seducing Sikh girls during freshers week at university.

Does sexual grooming of non-Muslim girls happen in Pakistan?

Yes, it does and that too at an alarming rate but due to media silence several do not get reported.

The role of Pakistani men in the grooming of non-Muslim girls in Pakistan was initially highlighted when a girl named Rinkle Kumari raised her voice against her forced conversion. She was shunned and married off by a spiritual Muslim group leader and has since disappeared from the radar.

While it is illegal to marry a minor in Pakistan, yet cases after cases, have come up where young non-Muslim girls as young as 5-years of age have been kidnapped and forced to convert and marry Muslims 4 times their age. This grooming has now become a major cause of concern.

The documentary addresses the cases of violent abductions, forced conversions, and forced marriages of minority girls documentary through 4 case studies of Hindu and Christian girls.

But yet, there is far more needs to be done to truly change the scenario.

Due to cases of forced conversions and religious persecution faced by Hindus, Sikhs, Buddhists, and Christians, the current Indian government led by Narendra Modi had to start a more liberal policy of migration much to the charging of the opposition leaders who found the policy to be discriminatory against the Muslim migrants and also against the secular nature of the Constitution.