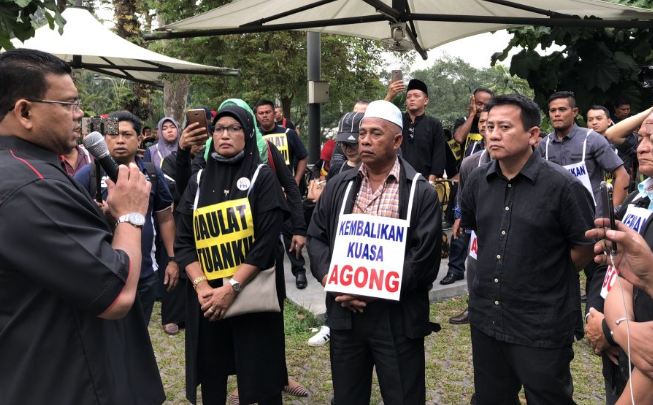 Protestors who claimed they were Pemantau Malaysia Baru (Guardians of New Malaysia) marched to the Bukit Aman federal police headquarters on the morning of 17th July 2018 for defending Islam. Islam is followed by the majority in Malaysia.

The group was protesting against the viral notion that the DAP, one of the leading coalition parties, is working towards making Christianity the official religion in Malaysia. The group also wanted to show support for Malay rights and also support the Tang di-Pertuan Agong, monarch and head of state in Malaysia, whose traditional powers the protestors said were being threatened by the new government.

The group also raised chants of Allah-o-Akbar during the march.

The problem began some time back when some high-profile appointments to top ministries went to non-Muslims.

Not just the appointments though, as even those appointed ran into trouble for posting information in Mandarin and disrespecting the official language of Malaysia which is the Bahasa Melayu. Malaysia is a Muslim-majority nation and is widely considered to be a moderate one, but of late several incidents have come to light which seriously challenged the ‘moderate’ image.