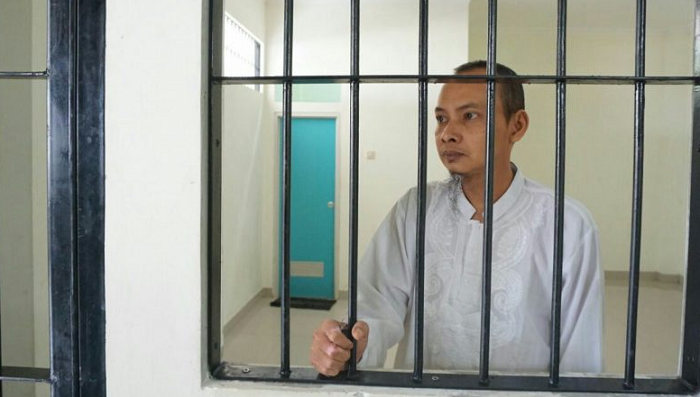 An Indonesian man has been jailed for five years on Monday for his Facebook post which has been found to be insulting and offensive to Islam.

The alleged insults against Islam, a religion followed by the majority of Indonesians, has again brought to light the controversial nature of complaints which saw a Christian governor thrown in jail for trying to interpret the Quran thereby committing blasphemy against Islam.

Alnoldy Bahari aged 39 was found guilty of hate speech against Islam as he had written in a Facebook post that he has experienced the presence of God and put a question mark on the faith of other Muslims.

Bahari’s lawyer Andi Komara told reporters that Bahari has been sentenced to five years in jail and also pay a fine of 100 million rupiah ($7,200). He said that they will very likely appeal as many facts were not taken into account.

Bahari comes from Pandeglang in West Java province of Indonesia and was charged with blasphemy against Islam and hate speech in December 2017 at the complaint of the militant Islamic Defenders Front (FPI) leader. FPI members were present outside the court premises in strong numbers during the sentencing.

Indonesia is slowly slipping towards the more extreme version of Islam as the groups like the FPI are gaining ground.

In February this year, a news surfaced from the village of Kebon Baru (Banten province), where an unknown radical Islamic group forced out a Buddhist Monk Mulyanto Nurhalim and even made him sign an agreement, in which the Monk committed that he will abandon his home. The extremist Muslim group had accused the Monk of proselytism.

The news of the Monk signing his own abandonment papers unearthed only six days after an online video of the Buddhist Monk reading and signing the document went viral.

Islamists were angered by a charity project in which the Buddhist Monk was taking part.

Asianews.it reported that the Monk was spreading fish eggs as he wanted to transform an abandoned ditch, where the villagers once used to extract sand, into a peach nursery which he wanted to be made available to the community.

The Monk can be seen saying:

“I declare my intention to leave my house in Babad, Legok district, by February 10th – the Monk states in the video reading a document – I undertake not hold rituals or recitations of prayer (at my house), since other Buddhists (from neighboring villages) have regularly visited to join me. Third parties consider their visits ‘prayer activities’ and raised the immediate concerns of the local population. If I violate this ‘agreement’, I will not object to legal action against me. This letter is signed without any intimidation”.

When he asks that:

Video of the Monk:

The Monk was accused of using his home as a “secret prayer center” and told him to not introduce any more sacred objects and accessories. Important to state here that the authorities deemed the visits of the other Monks as harmless and rejected any notion of conversion activity being undertaken by him.

Cricketer Daren Sammy is not leaving Christianity for Islam

Aceh, the Shariah-ruled province recently caned several unmarried couples for being close in public and ‘flirtations’ and two women for prostitution before a cheering crowd of hundreds. Last year, even the non-Muslims like the Buddhists were caned by Shariah, the punishment they said to have chosen voluntarily. However, since the international outrage that these punishments cause, now Aceh will not do public caning but would implement it behind closed doors of the prisons or detentions.

France has a problem with Islam: Hollande