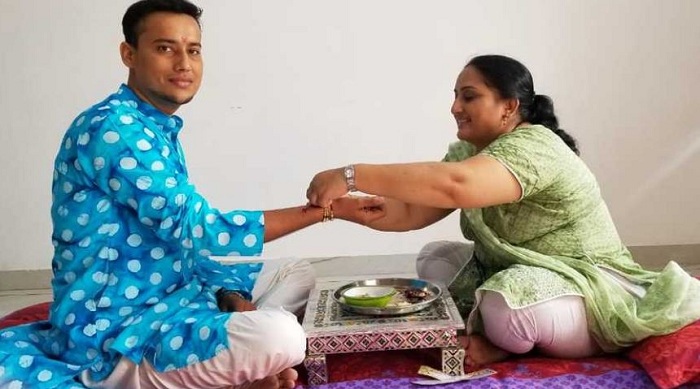 Festival of Rakshabandhan was celebrated all over the country with love and joy. Migrant Pakistani Hindu women feel special after migrating to India.

Migrant Pakistani Hindu ladies narrated say that India is like peer (parents’ home) and Prime Minister is like a brother, who has given them protection from all evils of the world. They have been praying for the long life of their brother PM Modi. Some of Pakistani Hindu migrants who have got Indian citizenship wished that Narendra Modi win the next general elections.

Conditions prevailing there in Pakistan are not safe for Hindus and other minorities. They are persecuted there now and often. Pakistani Hindu girls are not safe there at all. They are kidnapped and forcibly converted and married. No one is there to listen to their voice. Cries of converted Pakistani Hindu girls Rinkal Kumari, Sangita, Pirma, Kiran Meghwar, Leelan Jogi, Aarti Kumari, Priya Kaur, and more girls were never heard in power corridors and they never returned home. Every year more than 1000 teenage Hindu girls are kidnapped and forcibly converted in Pakistan. Because of this constant fear of kidnapping parents avoid sending their daughters to schools and girl children lives are limited to the closed door of their homes.

Elderly Pakistan Hindu migrant lady Miss Meira Kirshanlal recounted that her daughter Jaymala was kidnapped and never returned in Pakistan 10 years ago. No one – Police, Judge, Politician, or any religious leaders helped to get back her daughter. With a heavy heart and wet eyes, they left Pakistan to save her granddaughter and her daughter in laws. Now they have got Indian citizenship and granddaughter studies in school and son and daughter in law works in a factory. They feel ‘real’ freedom in India.

Dr. Bai, another migrant Pakistani Hindu lady, was working in Government hospital at Karachi. She said that there was constant fear in mind as soon as she went out for hospital duty or to market.  Mobiles and valuables are snatched on gunpoint. Patients misbehave and even threaten Hindu Doctors in Pakistan. Pakistani Hindu children are always scared at schools and peer groups.

Young girls Kavita and Reena describe the life in India as that of unbridled freedom. One can live her own life as per own wish.  In Pakistan, they celebrated Rakshabandhan in homes so that no neighbour could see them celebrating. But in India, the celebration of Rakshabandhan is on a grand scale with an open heart.  No fear, no restrictions, and only enjoyments.  The migrant Hindu girls from Pakistan see that this became possible only due to the Prime Minister.

Migrant Pakistani Hindu girls say that the credit goes to the PM due to the Union cabinet decision of July 2016 under Chairmanship of Prime Minister, who have offered many facilities and delegated power of citizenship to select District Collectors and State Home department thus making it fairly easy for the Hindu migrants from Pakistan. Due to this move, thousands of Hindu migrants families have got India Citizenship and become respectable citizens of India.

Dr. Darshna thanked Prime Minister of India for continued help and support to persecuted Hindu migrants’ rehabilitation in India.  They have left Pakistan only because they want to practice Hindu Dharma. They sacrificed the homes, businesses, children education etc. to stay Hindu. Here they got Narendrabhai Modi as the Prime Minister and as a brother who is giving all facilities to these migrant Hindu girls and their families. Now they are secure, safe, happy and definitely empowered in India.

But, Dr. Darshna also took the opportunity to request Prime Minister to grant early citizenship to migrant Hindu professionals and give permanent MCI registration to migrant Hindu Doctors.  Migrant professionals and migrant students who have studied in India like Doctors, Engineers, Lawyers, Scientists, Chartered Accountants, Pharmacists, Professors, Bankers, Management Consultants, Veterinary Doctors, Nurses, and other professionals should be given the membership of professional body immediately. These professionals should be given temporary govt. jobs till they get Indian citizenship as the private companies do not employ them due to their Pakistani origin.

Migrant Hindu women have also humbly requested the Prime Minister to give them 5 minutes worth of appointment so that they can come to Delhi and meet and greet him.